In the name of God, the Merciful, the Compassionate

Green Muslims Foundation holds the opinion that the proposed Bill from the Dutch “Party for the Animals” strengthens the rights of factory farmers to commit slaughter abuses.

The Bill from the “Party for the Animals” intends to abandon the permission for Jews and Muslims to slaughter animals without stunning them. This would require them to use the “Captive Pistol Stunning” (CPS) practice. This practice requires a pin to be shot in the head of the animal without stunning, after which the paralyzed animal is sawn into pieces. Scientifically, the question of whether the animal is alive or not remains unanswered. In contrast to what the public generally understands of this practice, the animal is not stunned with the injection but is actually shot down.

The traditional slaughter practice as held by Jews and Muslims prescribes a throat-cut after which the animal quickly bleeds to death. The advantages of this method of slaughter briefly summarized are: The blood is separated from the meat which improves the hygiene of the meat; Minimal animal suffering is ensured provided the religious conditions of craftsmanship regarding reducing animal stress are followed; and last but not least, these same prescriptions ensure care and preference for animal welfare comes before economic gain. The Foundation advocates a more impassioned economy.

Below is an elaboration of the position and vision of the Foundation.

Why is this Bill not in any way defending the interests of animals?

The term anaesthesia attached to the practice of head shot (or electrocution or gassing) is a very cynical understatement that has penetrated law from the bio-industry. Using this term in this context is bluntly misleading to the electorate.

There is no clear scientific evidence that the non-stunned slaughter by means of the throat cut leads to more animal suffering than by other non-stunned methods like the headshot, electrocution or gassing. Hence these latter three methods are not superior to the first from the perspective of reduced animal suffering. They are only better in terms of economic efficiency.

Given this lack of evidence and noting that the throat-cut method (with the introduction of industrial slaughter methods) has been protected by law , that it has been performed with conviction by Jewish Dutch people for 400 years and by Islamic Dutch people for 60 years, it must not be forbidden.

The throat-cut method without headshot is part of the dietary laws and cultural and religious celebrations of nearly one million Dutch citizens. A ban would realize far-reaching infringements to the (religious) liberties of these people.

Arguing that the throat-cut method without stunning should be banned is discriminatory as, in fact, the industrial slaughter methods also don’t stun.

A ban shall add to the feeling of unease among minority groups.

A ban on the throat-cut method without stunning will increase the transport of livestock in European countries even more.

The throat-cut method without stunning is a relatively marginal phenomenon and will probably remain so because of its economic inefficiency.

With the enforcement of highly efficient methods of slaughter from the bio-industry, the time for processing cattle individually is reduced. This promotes large numbers of animals being slaughtered in a short time, increasing unrest in the slaughterhouses, and contributes directly to increased stress, pain and fear in the animals. In other words, the methods increase the suffering of animals.

Finally, focus on the slaughter will distract focus from the legion of malpractices in the bio-industry concerning animal suffering. Issues like duration of pain and sorrow experienced by cattle are much more serious than the slaughter. Dutch society has a large and well founded consensus regarding the undesirability of these practices.

What is the constructive vision of the Foundation regarding the meat industry in the Netherlands?

Let it be clear that the Foundation supports the main objective of the “Party for the Animals” in referring to the Islamic sources which call Muslims to be responsible caretakers of creation. The Foundation doesn’t consider this a conservative viewpoint but rather honours the idea that for the observant authentic Islamic rules always represent a deep wisdom. The following ideas should contribute to improving the meat industry for the (Muslim) consumer.

Cases of birth and death are especially sacred moments. These moments require great care and attention, even regarding the handling of animals. Thus far the basic ideas of the Foundation.

The Foundation pleas for more applied scientific research to reduce animal suffering. The throat-cut without headshot method cannot be excluded from this research. Reversible stunning as applied to humans and pets (local anaesthesia) is a possibility to be researched. The effect on the quality of the consumable meat must also be considered.

The Foundation pleas for a complete coverage of the slaughter by professional control: permanent video recording, the presence of: a veterinarian, an official of the Food Safety Authority (VWA) and a representative of Islam that is respected for his or her integrity.

The Foundation pleas for certified skilled slaughterers and for the formation of a training institute that would be responsible for the certification. This would require all slaughterers to pass an examination focused on the Islamic knowledge and practical skills needed to properly slaughter animals. The exam would need to be retaken and passed regularly. For the assessment, video recordings of the daily conduct of the slaughterer should be included.

The Foundation pleas for reducing the distance between slaughter animals and their consumers. Slaughter should take place preferably in the specific name of an individual: a butcher or a consumer.

The foundation pleas for low-stress conditions of slaughter. For example through grazing and herding facilities in and around the slaughterhouse permit.

The Foundation pleas for small distances between farm and slaughter house. The possibility of reintroduction of slaughter in fields must be considered.

The Foundation pleas for Islamic food and meat standards that are defined by (representatives of) the Muslim consumer. The (religious) consumer must be first considered, not the producer. Transparency for the consumer is the key. Labelling (including extended information available via the internet) must provide the interested consumer with insight into the whole food chain the product followed. The producer should be made responsible and accountable for providing this.

The Foundation pleas for combining or integrating standards of organic agriculture with Islamic standards.

The Foundation pleas for a ban on export of meat products from the Netherlands labelled “halal” (allowed in Islam) when the above mentioned Islamic standards are not met.

The Foundation actively promotes the reform of the Dutch meat and halal industry. It takes the Muslim consumer as its primary target group. With regards to the consumption of meat by the Muslim consumer, the Foundation has the opinion that meat consumption should be drastically reduced. This is based on ethical and religious as well as health grounds. An active education and awareness program is key to achieving these ends next to the expected rise in the price of meat as a result of the reform envisioned.

The Foundation invites political, civil and commercial organizations to join in this cause to ensure interests and ideals are united towards a halal industry that excels.

Green Muslims Foundation aims to help Muslims adopt a more sustainable lifestyle; to be (self) critical and conscious and inspired by the Word of God. 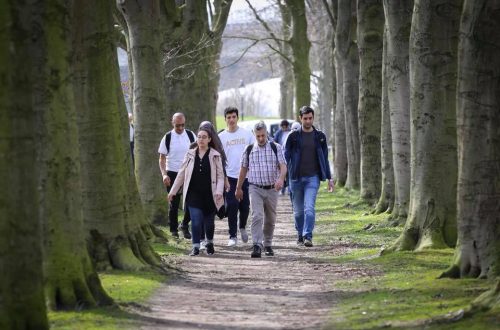